Ramos took it to his twitter page today 8th of July 2021 to appreciate his new club as as well state that he is raring to go! He wrote:

”The best place to keep on dreaming, the best club to keep on winning. We’re going to fight with everything we have for everything.” 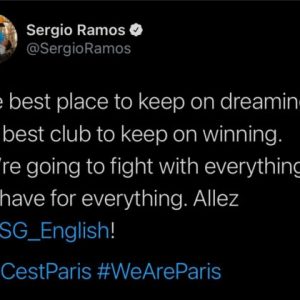 Away from Sergio Ramos, PSG has also secured the  highly-rated Moroccan right-back Achraf Hakimi in a £61m deal on a five-year contract from Inter Milan.

Also, former Liverpool combative midfielder, Georginio Wijnaldum, has joined the French side on a three-year deal.