Bwalya was a member of the national squad that participated at the 1988 Olympic Games, making his mark with a most famous hat-trick in a 4–0 victory against Italy. At the full international level, he appeared in 87 international matches and scored 39 goals from 1983 to 2004.

He debuted against Sudan in April 1983 at Dag Hammarskjoeld Stadium in a Cup of Nations qualifier in Ndola, and scored his first goal against Uganda in a World Cup qualifier the following year at the same venue. He has appeared in multiple tournaments, including six editions of the African Cup of Nations.

Although he was captain of the national football team during the qualification matches for the 1994 World Cup, Kalusha was not on the ill-fated flight on 27 April 1993 when the entire team and its management were killed when the plane crashed into the Atlantic Ocean off Gabon. As he was playing for PSV Eindhoven, his schedule had him flying from the Netherlands to Senegal to join the team instead of being on the team plane.

Kalusha Bwalya, Africa’s most famous “Number 11”, took on the mantle of spearheading the revival of the national side the following year, captaining the side to the Runners-Up spot at the CAF African Nations Cup 1994 in Tunisia—where they succumbed to the Super Eagles of Nigeria; this was to be the peak of his own career and Zambian football for a long time to come.

The national team finished in 3rd place at the next edition of the Africa Cup in South Africa in 1996, with Kalusha winning the Golden Boot Award as the top scorer at the tournament.

He was a player-coach during the African 2006 World Cup qualification matches. On 5 September 2004, Zambia played Liberia, and the match was tied 0–0 minutes before the end. Kalusha, aged 41, came off the bench during the second half, scoring from a trademark direct free kick to give Zambia a 1–0 victory and the lead of Africa’s Group 1.[6] However, Zambia finished third and failed to qualify for the 2006 World Cup.

Despite the failure to qualify, Bwalya coached Zambia at the 2006 African Cup of Nations. Following their elimination in the first round, however, Bwalya resigned from his post. Kalusha’s dream of holding the coveted AFCON trophy came 2012 when the Zambia National Football Team, which was underestimated by many football pundits upset the star-studded Ivory Coast to win the final of the 2012 tournament.

As Zambian FA President, he joined the players and lifted the cup in a country where his former teammates perished in an aircraft disaster. This emotional story is narrated in the documentary film “Eighteam“, directed by Juan Rodriguez-Briso.

He has nevertheless remained actively involved in international football, contributing to the 2006 World Cup as a member of FIFA’s Technical Study Group. He was also one of the ambassadors of the 2010 World Cup which was held in South Africa.

Bwalya’s career in Europe began at Cercle Brugge in Belgium. In his first season, he was the club’s top scorer and was twice voted supporters’ player of the year. Such was his impact that Dutch giants PSV Eindhoven took him to the Eredivisie, and he describes winning the championship twice in 1990/91 and 1991/92, under Bobby Robson, as a career highlight.

He jokingly adds that: “Most of the time we played in the opponents half, because the team was so good. You know, we had Romario, Gerald Vanenburg, Eric Gerets, Wim Kieft and Hans van Breukelen and just to be with that group, to train with them day in, day out, was an experience.”

Bwalya’s next stop was Club America, to whom he moved in 1994. The Mexican club’s home ground is the legendary Azteca, an arena of which the Zambian icon has very fond memories. As he told FIFA.com: “I am privileged to have played in the best stadium in the world – and to have been able to call it my home ground.” The Mexico experience in general was cherished by Bwalya, who devoted almost eight years of his career to the country and recalls his time there as “probably the best of my life”.

On the international front, his earliest achievement was arguably one of the most remarkable hat-tricks in modern football history, with three-times World Cup champions Italy on the receiving end in a 4–0 win for the Zambians at the 1988 Olympics. Bwalya acknowledges that the result was a surprise, but adds: “Zambia is a sleeping giant in a way. It is a small country in terms of football, but we were the first African team to beat a European power as convincingly as that.” 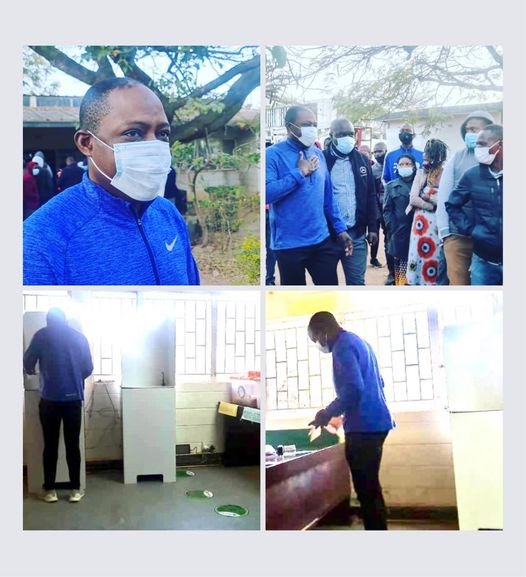 Kalusha Bwalya Has Called on all Zambians to remain United